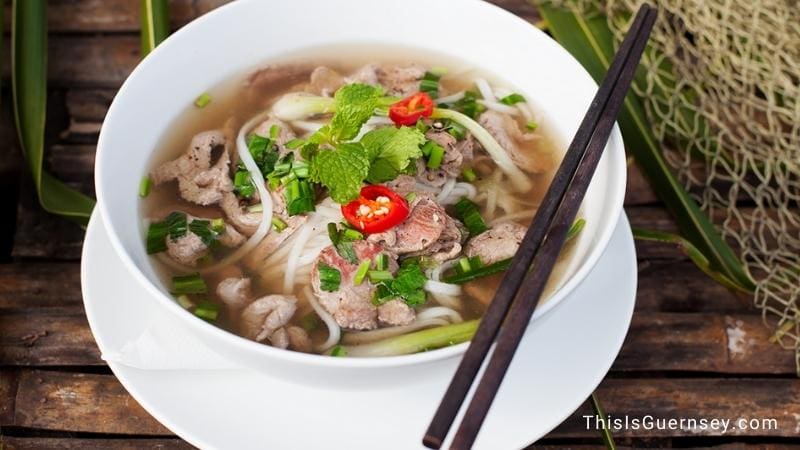 Is pho good to eat when you have diarrhea? Yes! As a Vietnamese, I can confirm that this famous Viet food recipe can help you recover from a severe case of diarrhea, among tons of other common diseases. When people suffer from diarrhea, their body naturally craves more hydration. Thus eating pho, which consists primarily of fluid and noodles, helps supplement water and fill the stomach.

Learn the benefits of Pho here! It’s an ideal way to get your digestive system back on track and regain some of your lost energy!

Topic: Is Pho Good For Diarrhea Or It Makes It Worse?

We all know that pho is comfort food, but how does it help with diarrhea, specifically? Let’s answer “Is pho good to eat when you have diarrhea?”!

Is pho good to eat when you have diarrhea?

Yes, eating pho is perfectly fine when you suffer from diarrhea. There are several benefits to eating pho when you have diarrhea. The pho broth is rich in nutrients, including sodium, protein, and vitamins. It compensates our bodies with lost complements due to the constant flux and improves the immune system.

Can pho give you diarrhea?

Medically speaking, any food can give you diarrhea, including pho, even if it helps fight diarrhea in common cases.

There is no other way to test it except for trying to eat a bowl of pho. We encourage you to try pho in a smaller portion. Pho restaurants in the US usually serve pho in a much larger portion than it originally is in Vietnam. Ask the waiters to bring you a smaller bowl with less pho in it to test your stomach.

Why does pho give me diarrhea?

If you have a sensitive stomach and it’s your first time trying pho, the rich combo of spices, garnishes, and ingredients may result too much for your digestive system to handle. You can try making pho at home to reduce the use of spices, using chicken will make your bowl lighter as well.

Health Benefits Of Pho Against Other Common Diseases

Other than diarrhea, pho can help solve some other digestive or immunity issues. Get to know othe health benefits of pho here.

One of the spices that people commonly use in pho is ginger. And we all know that ginger has many natural benefits to the stomach and digestion. One of the most famous remedies in Vietnam to cure stomach aches at home is ginger water, which consists of hot water, mashed ginger, and a tablespoon of sugar. Drinking this subsides the stomach ache in 5 to 10 minutes only.

Therefore, pho with ginger-contained broth is very good for stomach aches. It warms the body and cleanses the intestine, which is highly beneficial for treating upset abdominal.

Is pho good for food poisoning?

Star anis are a great detox ingredient. It is anti-inflammatory and antibacterial, so it will subside the pain and fight the toxin in your digestive system.

Is pho good for nausea?

If your bowl of pho contains ginger and anis, then yes it is good for nausea. These ingredients are very good for fighting low blood pressure, cardiovascular collapse, and dizziness.

Pho has low calories and is high in protein, sodium, and fiber. Vietnamese people also believe pho is good for the heart, as it helps regulate blood circulation thanks to its high potassium content.

Is pho good for flu?

Pho is like chicken soup but Asian. The dish is well-known among Vietnamese for treating flu since it clears the airway and warms the body. Pho incorporates more spices and herbs to naturally improve your immunity and help speed up your body’s healing time. It also relieves congestion, alleviates a sore throat, reducing the chance of getting an infection. Perfect for flu and cold!

Step 1: Pour beef broth into a big pot. You will need about 400-500 ml of broth for each bowl of pho. If the broth doesn’t taste salty enough, you can sprinkle some salt or add fish sauce. But remember not to put too much since the recipe treats diarrhea or flu.

Step 2: Add anis, charred onion, and ginger into the mixture. Bring the water to boiling point without covering the entire mouth of the pot since this will darken the broth color (unpleasant).

Step 3: Prepare the rice noodles. You should take out the exact amount you would use for a single portion of spaghetti or a bit more. Boil water and dip the noodles in hot water for about 2 minutes.

Step 4: Slice some beef or chicken meat into small or thin pieces. Dip them slightly in hot water for about 1 minute.

Step 5: Put the noodles, meat, and other garnishes like cilantro, scallions, and mint leaves into the bowl.

Step 6: Add the boiling broth into the bowl and enjoy. Don’t drink the broth too quickly. Start with the noodles and meat to fill your stomach and sip the broth later to tranquilize the digestive system. This should help with your diarrhea and other diseases like flu or cold.

Is pho good for your stomach?

Yes, it improves the immune system and relieves our stomach pain thanks to its spices that carry medicinal benefits.

Can pho make you sick?

If you are allergic to any ingredient, pho can make you sick. Ensure you check the ingredients list before consuming to avoid the worst scenario.

Is pho easy to digest?

Pho is filling, but it digests very quickly, and you will soon feel hungry again after a few hours. A bowl of pho only makes up about 20% of the average daily consumption of calories (2000 calories).

Why does pho make my stomach hurt?

The only possible explanation is that your stomach is sensitive to one or some of the ingredients of this dish. If you are sure this is not the reason, try eating pho in smaller portions to avoid overfilling your stomach with liquid and starch, which is unsuitable for reflux and stomach ache.

In conclusion, the answer to this question is “yes”, pho is a nutritious food that will help you recover from diarrhea. Pho is an excellent source of sodium that helps keep our bodies hydrated, and it’s also a good source of protein, iron, calcium, vitamin B12, and potassium. It’s also a healthy meal that will help you fight against cold, flu, and stomach aches.

If you have diarrhea, you should eat a lot of pho to recover your health!