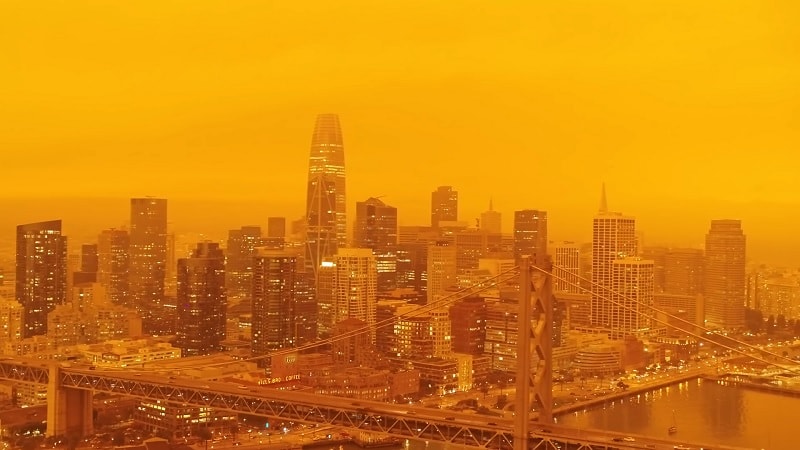 The yellow sky is a normal phenomenon, and we can easily see it when rain or storm is coming. We can observe the yellow-orange sky when the sunrise and sunset occur.

In this article, the topic of “yellow sky meaning” is discussed in detail. This article also presents an explanation of the reason for the yellow sky. So, keep reading to find your answer!

What does it mean when the sky is yellow?

Usually, the yellow sky indicates the sunset of the day. Besides, it often signifies an incoming winter storm, especially on a warm day.

Due to the sunlight filtering through clouds and air, a yellow tint appears in the sky. The blue light is scattered, while yellow-orange light continues transmitted to our eyes. So, we can see the yellow-orange sky, especially the storm is around.

Why is it yellow outside?

The reasons for the yellow sky can be due to dust, smoke, storm, rain, and the sunrise and sunset phenomena.

Here, we will go deeper into the reason why the sky is yellow. Many things can cause a yellow sky, but all of them are based on the key principle of light scattering. The scattering of sunlight can be demonstrated as follows.

The sunlight is scattered by the air molecules and also by particles of dust, pollen, and moisture droplets in the atmosphere. The sunlight is white light, which is comprised of several light wavelengths, including blue and violet light with shorter wavelengths and yellow-orange-red light with longer wavelengths. When transmitted in the air, the shorter-wavelength light is easily scattered away or absorbed, leaving the longer-wavelength light in the line to our eyes.

Besides, when the sky has thick layers of smoke or dust, the short-wavelength light – blue light – is blocked, and only the longer-wavelength – yellow, orange, and red – can transmit through, resulting in the yellow sky. Therefore, we usually see the news reporting the yellow-orange skies when there is a great amount of smoke or pollen in the sky.

When the summer sky is yellow, it is believed to be a sign of good weather the next day. The cause of the yellow sky in summer is the summertime fog.

Summertime fog happens more on the western coast of the US, owing to the different air temperatures between the inland and the ocean. You can get the full explanation in an interactive demonstration by Newsbound about De-Mystifying The San Francisco Fog.

What Does It Mean When The Sky Is Yellow During A Storm?

If you have noticed the yellow clouds/sky during a heavy storm, it is a normal phenomenon with no special meaning.

Why does the sky look yellow during a storm?

The reason for the sky looking yellow during the storm is the effect of Mie and Rayleigh’s light scattering. During the storm, dust and rain droplets will scatter light. According to the scattering theories, the yellow, red, and orange lights with longer wavelengths are scattered more while the blue light with a shorter wavelength is absorbed and blocked. Thus, you can occasionally see the yellow tint in the sky during the storm.

Why is the sky yellow after a rain or a storm?

The yellow sky after rain can be the result of the combination of the Mie scattering and Rayleigh scattering. Overall, the blue light is blocked and absorbed by large pollen and scattered away by air molecules, while the yellow-orange light is scattered and transmitted.

The Mie scattering of light is usually caused by the large particles in the atmosphere, such as pollen, dust, and rain droplets, which are often brought by the rain. As mentioned above, the yellow-red light has a longer wavelength than the blue one, which will scatter when contacting large-size particles. Meanwhile, blue light with a shorter wavelength is absorbed by these larger pollens and droplets.

Then, the Rayleigh scattering, in combination with the angle of the sun, contributes to this scattering process. If the sun is lower in the sky, the sunlight will transmit more effectively in the atmosphere than when the sun is higher. If the sunlight goes through more air, it means the blue and violet light components will be scattered away from your eyes while the remained yellow-red light will be continues transmitted to your eyes. That’s why you see the yellow sky after the rain or the storm.

Why is the sky yellow before a storm?

The yellow sky means the sign of a thunderstorm or a tornado because the moisture droplets and dust in the sky scatter and absorb the blue light, leaving the yellow-green light for us to see. However, the reason for a yellow sky before a storm is also due to the time when the storm form.

In weather news, the National Oceanic and Atmospheric Administration (NOAA) National Severe Storms Laboratory (NSSL) explained that the storms usually develop in the late afternoon, the time when the sunset occurs, and they filter the sunset light. Thus, the sky appears to be in a yellow-orange hue. The yellow-orange hue is the result of the sunlight scattering process, which was demonstrated above.

Why Is There A Yellow Sky At Night?

One of the common reasons for the night yellow sky is air pollution, including the dust from a far-off sandstorm or oxides of nitrogen and sulfur pollution. Besides, the yellow sky at night is also because of the light pollution, which is often observed in the big city.

Additionally, if the evening thunderstorm is around, it may also cause the evening sky to be yellow. The thunderstorm usually happens in the early evening, which is also around the sunset. At this time, the sunlight is still emitted by the sun though it is blocked by clouds. thus, the yellow-orange color of sunlight can go through the clouds and become visible to our eyes.

Is it bad if the sky is yellow?

The answer is “No.” As mentioned above, the yellow sky is because of the sunrise and sunset. It can be a good sign indicating the great weather of the next day in the summer. However, if the sky has more green color than a yellow one, it is often a bad sign that indicates tornadoes.

What color is the sky when a tornado is coming?

When a tornado is coming, the sky is usually in greenish-yellow color.

Is it normal for the sky to be yellow?

Yes, it is normal for the sky to be yellow. The yellow sky is a normal weather phenomenon, and it’s not a sign of the end of the world!