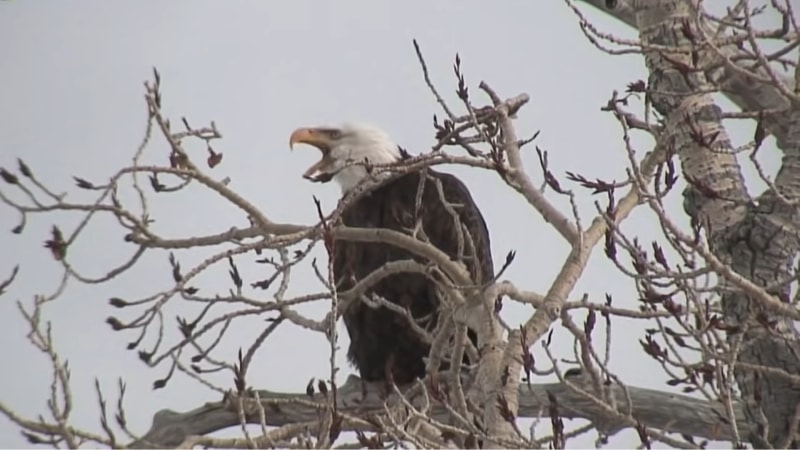 The bald eagle is a symbol of the United States. We surely at least once heard and were impressed with the gorgeous call of the Eagle on TV. However, It is a fake bald eagle sound.

Now you may be wondering, what sound does an eagle make? What do bald eagles actually sound like? and what is the fake bald eagle you usually hear on TV?

What Sound Does An Eagle Make?

Even though bald eagles appear powerful, their calls are surprisingly weak.  Their weak long sound call is usually a series of high and soft-pitched sounds.

A high-pitched whistle and piping are the calls of both males and females. It is not what you might expect to see from such a powerful raptor, but I find it to be gorgeous. As well as this, when the female is ready for copulation, she has a distinct single note call that signals her readiness for the mating process.

Do eagles screech or scream?

Eagles either screech or scream. When they’re in the trees, they make a screeching sound. Eagles sometimes scream for two purposes: to scare off predators and to warn other eagles when they are in danger. Additionally, the eagle can scream to assert its dominance over a particular territory.

Why do eagles screech?

Eagles screech when another eagle is present or when they are approaching a feeding area or perch. You also might hear eagles scream because they are immature birds that want something to eat.

Some people describe eagle calls as a combination of high-pitched “whistling” and “piping”. Some people refer to it as “chattering”, as though it were the sound of a squirrel talking. Others describe it as “chirping”, and as odd as it may seem, this brings the largest bird of prey down almost to the level of the smallest songbird at the bird feeder.

There are several distinct calls that bald eagles make.

The Bald Eagle’s voice is surprisingly weak for such a powerful bird. Its voice can be compared to a snickering laugh. If we use the music format to describe it, it consists of seven or eight notes that are played out quickly and intermittently in a very laborious way. That sound can be written like ki-ki-ki-ki-ki-ki-ki-ker.

The young bald eagles have different sounds from the adults.  The hatchlings emit a single-note tonal peep as soon as they hatch. As the bird grows, its calls become more complicated and have a wider volume range. When they are 30-day old,  their calls are quite similar to that of adults, although there is no direct evidence that offsprings imitate the adult voices.

Another distinctive call of the Bald Eagle is the call made by females when they are ready to copulate. The female eagle will repeat the soft and high-pitched sound many times.

The male also has a distinct call that functions as a defense system. It is a high-pitched sound that signals the presence of other birds or humans. They will also use this to prevent attacks at community feeding spots.

Is it truly a bald eagle sound on the tv?

Have you ever heard a bald eagle call on TV? It is a gorgeous sound! However, the truth may disappoint you a bit about this bird. What you’re hearing is the call of the red-tailed hawk, not the call of the bald eagle.  In reality, bald eagles call are more like seagulls.

Why do they fake bald eagle sound?

“Ca-caw”, which you usually hear from bald eagles in movies, is actually the call of the red-tailed hawk. Bald eagles sound more like seagulls.

What kind of bird makes a screeching sound?

Screeching can be a sound produced by a variety of different kinds of birds. These types of owls are Screech Owls, Barred Owls, and Barn Owls, the most common ones. They commonly hoot loudly when they call for their mate or are scared to protect themselves from predators.

What sound does bird make?

Birds make a lot of different sounds depending on the kind of birth: chirps, croaks, whistles, rattles, drumming, trills, and many more.