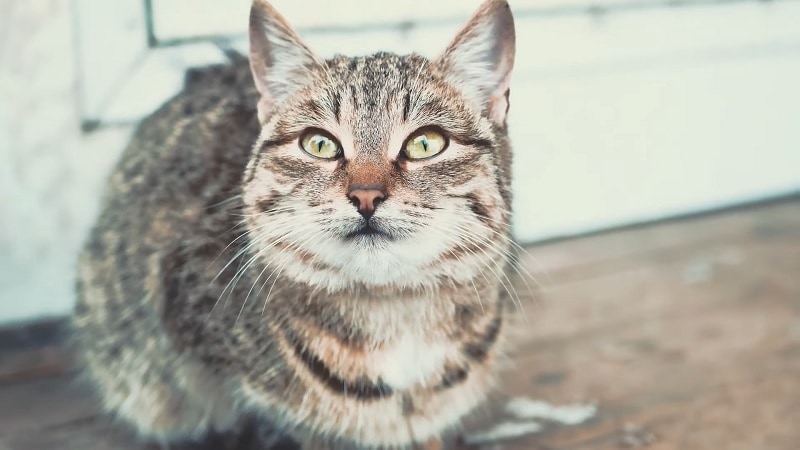 What Are Brindle Cats?

Brindle cats are referred to as either tabby cats or tortoiseshell cats. Brindle is not a cat breed, it is a pattern of cat coat colors.

The “brindle” term is not commonly used for cats; it is mostly for dogs. Brindle is a pattern of coat colors in animals, often appearing as black stripes on a red base. So, sometimes it is called “tiger-striped,” but more subtle than that of a tiger’s coat. Thus, a brindle cat can be a tabby cat.

Besides, brindle is caused by a complex gene process and is technically a form of mosaicism, so it also appears in the form of color patches, which is in the case of tortoiseshell cats.

Generally, the brindle coat coloring pattern is created by a complex genetic process, which often involves a functional Agouti gene to control the eumelanic and pheomelanic pigments.

The Agouti gene is required to create variations in color in many animals. Agouti regulates the coat coloring pattern in animals’ hairs ar fur by working with extension to manage the melanin color that produces those patterns.

Particularly, Lomax and Robinson demonstrated in their study in 1988 that the brindle type in dogs has some similar features to the tabby stripping type in cats because both have patches or stripes of eumelanic vs. pheomelanic hairs that require the Agouti involvement. In research about domestic dogs’ brindle coat color, Kerns and partners showed the Agouti responsibility for regulating the effects of the brindle to produce phenotypes “black and brindle” or “black with brindle points.”

Types of brindle patterns in cats

Brindle cats are classified into two types: mosaic and chimera.

Because the brindle pattern is also known as the tabby stripping and tortoiseshell patching coats, breeds of a brindle cat are similar to those of a tabby cat and tortoiseshell cat. Here are some beautiful cat breeds that have brindle coat color marks.

The American Shorthair is a domestic cat with a round face and short ears. It is the cat breed formally developed in North America. It is a true working cat, used for controlling rodent populations, according to Cat Fanciers’ Association. Besides, American Shorthair cats, according to the CFA, are generally healthy, easy-going, affectionate with their owners, and social with strangers. With suitable care and diet, they can live for 15 years and more.

The British Shorthair is a domestic cat with a distinctively stocky body, dense coat, and broad face. It has the legacy name of British Blue. British Shorthair cats have various colors and patterns, including tabby and tortoiseshell variants. They have sweet nature and are devoted to owners but not as active as other cat breeds. Their lifespan expectancy is from 14 years up to 20 years. In reality, data have shown that their average lifetime is about 10-14 years.

The Persian cat is a long-haired cat breed with a round face. Their coloration can cover a wide range of cat coat-pattern variations. The tabby and tortoiseshell variants are also included. The lifespan of a Persian cat is about 12.5 years. However, with the modern brachycephalic face structure, the Persian cat faces many health problems, especially breathing difficulties.

The Maine Coon is one of the biggest domestic cat breeds. This cat breed has long hair, a robust bone structure, and a rectangular body shape. They have gentle personalities, are loyal to their owners, and are cautious with strangers. They are generally a hardy cat breed and can live for above 12.5 years.

The Bengal is a domestic cat breed created from a hybrid cat breed with the leopard cat (a small Asian wild cat). Bengal cats have long, lean, and muscular bodies, so they are generally larger than most other domestic cats. They are very energetic and playful cats; thus, they need a lot of exercise and playing activities. They have many marking variants, but the spot/rosette marking is the most common.

The Abyssinian cat is a domestic short-haired and medium-sized cat breed with a distinctive “ticked” tabby coat. Abyssinians are extroverted, intelligent, playful, and very attached to their owners. So, they are easily depressed if they do not receive enough activities and attention from the owners. They often have problems with gums’ inflammation, kidney disorder, and blindness owing to gene mutation.

The American Bobtail is an uncommon domestic cat breed, well-known for its short tail, which is about one-third to one-half the length of normal cat tails. They are both short-haired and long-haired and a hardy cat breed that can easily and quickly adapt to environmental changes. American Bobtails are relatively energetic, playful, and clever.

The Devon Rex cat breed has tall and large ears, short and curvy hair, and a slender body. They are one of the most playful and mischievous cats and are capable of learning difficult tricks. They are also affectionate pets that usually follow their owners from room to room.

Brindle cats often have a lifespan expectancy of around 14-20 years, which is also the lifespan of most domestic cat breeds.

Depending on the breed, their lifespan, in reality, can vary. For example, if a brindle cat is from the American Shorthair breed, it can live for 15 years, while the cat from the Persian breed can live just about 12.5 years. Appropriate diets with enough nutrients and sufficient exercise can help a brindle cat live longer.

Depending on the breed your brindle cat belongs, it can face different health problems. One of the most common health issues in cats is hypertrophic cardiomyopathy heart disease. So, to ensure your brindle cat’s good health, you should provide them with a quality diet and exercise activity, lots of attention and care, and annual vaccinations and veterinary checkups.

The personality of brindle cats is various because it depends on the specific cat breed’s personality. They can be very active and mischievous, but also be lazy and not sociable.

Some domestic cat breeds are highly energetic and playful, requiring constant activities to stay happy and healthy, for example, the Bengal and Abyssinian breeds. Meanwhile, other cat breeds with brindle coats are quite lazy, such as the Persian and British Shorthair breeds.

Though brindle cats’ personalities are different from each other, they all need much attention, love, and care from their owners. So, no matter what brindle cat breed you owns, just shower them with your love and care.

Some Interesting Facts About Brindle Cats

Can brindle cats be male?

Yes, brindle cats can be male, but they are rare.
It is reported that in 3000 brindled cats, only one cat is male.

Are Brindle and tortoiseshell the same?

Yes, brindle cats are tortoiseshell cats. They indicate the same coat coloring patterns in cat breeds.
The “brindle” is often used for dogs, while the term “tabby” or “tortoiseshell” are common in cats. Though the brindle-pattern formation process in dogs and cats is different, it does require the appearance of a functional Agouti.

Are all brindle cats female?

Not all brindle cats are female, there are also male individuals.
Owing to the complex genetic process responsible for creating the brindle pattern, most cats owning this specific coat marking are female. The male brindle cat is a rare case.