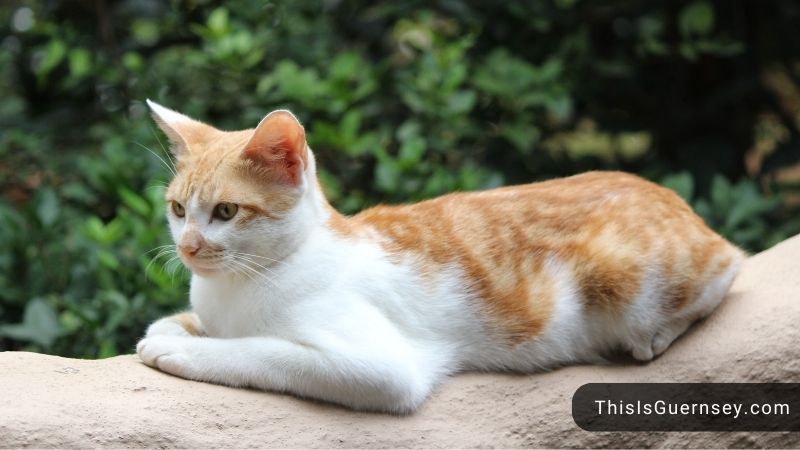 The orange and white colors on cats’ coats usually go with striped patterns, referring to the tabby coating on cats. These tabby cats with such colors are also called orange tabby cats. Orange tabby is the term that refers to the cat’s coating pattern, not its breed. There are many breeds that can have an orange/white tabby coat.

In this article, you will discover the coat’s characteristics, personalities, and interesting facts about orange tabbies. It also provides you with a list of 15 Orange and White Cat Breeds.

Check it out to see your favorite orange and white cat breeds!

Besides, if you care about brindle cats, check the Brindle Cats 101 article for more interesting and useful information.

Cymric cats are semi-long-haired domestic cats that originated from the breeding program in Canada. A Cymric cat weighs between seven and thirteen pounds, is muscular, compact, medium-sized, and has a sturdy bone structure. Their bodies are cobby and rounded with large and full eyes and ears. The Cymric is an intelligent, playful cat that is loyal to its owners. They are outgoing and can get along well with other pets and kids.

Cornish Rex is a domestic cat with orange and white fur. Unlike other domestic felines, Cornish Rex has unique curly coats giving a velvet-like feeling when touching. This special characteristic is because they have an undercoat rather than the typical three-layered coat like the others. This also means that they prefer staying indoors, in warm and dry places. They are sensitive to low temperatures. Cornish Rex is an adventurous, curious, and intelligent cat breed.

Devon Rex has curly hair similar to that of the Cornish Rex. They also have small heads, large ears, and large eyes. They are very intelligent and can easily learn difficult tricks such as walk on a leash, jump, and heel. You can easily find that they are affectionate to their owners and keeps following owners from room to room.

Munchkins are a relatively new breed of cat that is unique with their very short legs. Their tiny legs are the result of genetic mutations referred to as achondroplasia. Munchkins are considered the original dwarf cats. There are many different coat colors of Munchkin cats, including a rich orange color or a lighter orange color.

The Maine Coon is a large, affectionate cat that loves to spend time with its owners and play with them. The fur on Maine Coons is long and thick, requiring regular grooming to keep it in good condition. Due to their thick and long fur, they are hardy cats who can handle harsh winter climates.

Persian cats are a long-haired breed of cat recognized by their round face and short muzzle. They are reported to be one of the oldest cat breeds in the world. Besides the long and thick hair, they also have short legs, wide heads, far-apart ears, and large eyes.

Turkish Angora is a cat breed that originated in Turkey rather than Scotland. This breed has been around since the 1600s, making it one of the oldest domestic cats available today. They are distinguished by their long, silky coats, as well as their elegant, sinuous bodies. It is possible to find a Turkish Angora cat in a wide variety of colors, such as tabby, black, chocolate brown, and smoke-colored variations.

The Turkish Van has a moderately long tail and a large, muscular body with a short neck and broad shoulders. Turkish Van cats are friendly, outgoing, and affectionate towards their human family members. They have no problem with separation anxiety when kept alone in the house. They prefer being around other Turkish Vans when placed in a home with other cats.

The Scottish Fold breed of cat is best known for its small ears. Their tiny ears that flop forward towards their skulls are attributed to a gene mutation that develops cartilage incorrectly. In addition to their ears, they have a medium build and short legs and tails. This cat breed is very laid back and can get along well with other pets. They prefer being outdoors and playing outdoor games. They also hate loneliness.

A breed created by natural selection, the American Bobtail is brilliant and looks like a wildcat. The bobbed tails of this breed result from a genetic mutation and make it instantly recognizable. American Bobtails enjoy playing and can play the same game for hours without growing bored.

American Curl cats are recognized for their unusual curl-back ears. Despite their cute appearance, these ears will require frequent cleaning and care. Its unusual shape makes the ear canal prone to blockages and infections because of its twisting and narrowing.

The American Shorthair cat is muscular because it was originally used for hunting mice. Their chests are broader, and their legs and jaws are very strong. They have short fur, making it easy to manage. An American Shorthair’s coat has a wide range of recognized colors, and orange is one of the more common colors.

British Shorthairs have stocky bodies with dense hair and rounded, broad faces. Their coats can come in many colors, such as orange tabby and colorpoint. British Shorthairs are not the active cat breed. They usually stay inactive when no one is at home and silently wait for their owner. However, they are sweet cats and show great affection to their owners by following and staying with owners all day.

The specialty of the Oriental Shorthairs is that they have green eyes. Besides, they are also recognized for their long and angular head, tall pointed ears, and slender limbs. Their coat colors and patterns can come in a wide range, including about 300 variations possibly formed under CFA conformation rules. The orange tabby is among these color and pattern combinations.

European Shorthairs originated from Sweden. They have firm and muscular bodies with broad and well-muscled chests. They also have short and dense coats which are glossy and springy. They are a friendly cat breed that shows great affection to their owners and can form a strong bond with their human family.

The patterns on orange tabbies’ coats include four types: the classic, the mackerel, the spotted, and the ticked patterns.

Often referred to as tiger cats, mackerel tabbies have coat patterns that resemble those of tigers. This is the typical type of tabby cat that people often think of when hearing the term “tabby.” Cats with Mackerel tabby stripes have a lighter base color and perpendicular stripes running across their spines. The mackerel tabby is a type of orange cat with a lighter orange base and dark, rich orange stripes.

The coat colors of cats do not determine their personalities, it’s the breed they belong to. Though different orange and white cat breeds have unique personalities, in general, the orange tabbies are friendly and playful cats.

They are also intelligent, independent, outgoing, and adventurous. They are often moderately energetic, love to play games, and easily get along with other pets.

Most orange and white cat breeds, or orange tabby breeds, are loyal and affectionate towards their owners. They will follow their owners’ activities when they trust them.

There is a historical reference for orange tabbies

There’s an old legend about baby Jesus being comforted by a warm, purring orange tabby when he couldn’t sleep. According to the story, Mother Mary left the letter “M” in the cat’s fur after kissing it on the forehead. Besides, some retellings claim she drew her first initial on the cat’s forehead with a gentle finger. Hence, every tabby cat you’ll find today has a pattern on its forehead resembling the letter M.

Most orange tabbies are male

The ginger cats may also develop adorable freckles in addition to their original pink noses. It is normal for freckles to appear around the gums, lips, or nose area in orange cats. This type of freckle is caused by a benign genetic condition called lentigo, which causes an increase in pigment-producing cells around the lips, nose, and eyes, resulting in those little black spots. In most cases, these freckles are harmless, but a veterinarian should be consulted if they change in size or pigmentation.

What are white and orange cats called?

The white and orange cats are usually called tabby cats. This is because the orange and white colors on their coats usually go with striped patterns, referring to the tabby coating on cats.

Are orange and white cats friendly?

Yes, orange and white cats are friendly, social, and show a great extent of affection.

Are orange and white cats usually male or female?

The orange and white cats are usually male. Owing to the genetic link between the coat color and sex, orange tabbies are mostly males, accounting for about 75-80%.