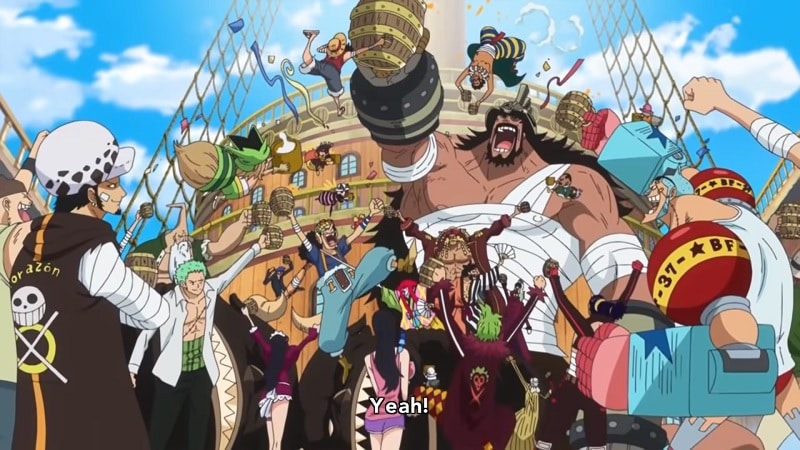 Dressrosa arc is one of the longest arcs in One Piece. It is the final arc in the Dressrosa Saga, following the Punk Hazard Arc.

This article will cover the main information about this arc, including the question, “What episode does Dressrosa end?” So, if you’re watching One Piece and want to jump to the Dressrosa arc, you can find it in this article.

Note: There are also some spoilers in this article.

Dressrosa is the second island the Straw Hats arrived in the New World. This island is ruled by the Shichibukai, Donquixote Doflamingo.

When does the Dressrosa arc start & end?

This arc is the seventh season, featuring 118 episodes, of the One Piece anime series. The anime adaption of the Dressrosa arc covers the story from the end of volume 70 to the middle of volume 80.

What volumes are the Dressrosa arc?

The Dressrosa arc expands over 11 volumes, from volume 70 to volume 80. With over 100 chapters included, it took about two years to finish this arc.

How Long Is The Dressrosa Arc?

The Dressrosa Arc is the second longest arc in the storyline of the One Piece series. The anime episodes covering this arc are from 629 to 746, including 118 episodes, taking about 2 years to finish (2014-2016). The releasing time of the manga for this arc also takes 2 years to complete.

Why did the Dressrosa arc take so long?

One Piece’s fans agreed that the Dressrosa arc is too long as the arc’s pace goes very slow.

The slow pace may be because TOEI Animation decided to adapt one manga chapter to one anime episode while not making enough filler or taking breaks between seasons to let the manga go ahead. Thus, the anime and the manga are very close, causing them to add many unnecessary reaction shots or repeated flashbacks to get enough running time for each episode.

The other reason contributing to the significant length of this arc is that it has many introductions and developments in characters and the storyline. We can see many new characters are introduced in this Dressrosa arc; a new storyline is also developed to fill the gap left after the time skip.

What Happened In The Dressrosa Arc?

*Spoiler alert! This section is a spoiler!*

The Dressrosa arc focuses on the Straw Hats’ adventure to Dressrosa island, collaborating with other teams to save the island.

The Dressrosa island was controlled by the warlord Donquixote Doflamingo. When the Straw Hats arrived on the island, they learned about the island conquering of Doflamingo and teamed up with the Revolutionaries and the kingdom’s deposed princess Viola to defeat Doflamingo and save Dressrosa.

There are some important events in this Dressrosa arc, including:

When Do Luffy & The Straw Hats Arrive On & Leave The Dressrosa?

How did the Dressrosa end?

The Dressrosa ends with the Straw Hats and their allies outthrew Doflamingo from the Dressrosa and the new formation of the Straw Hat Grand Fleet. Then, Luffy and his newly-formed Grand Fleet departed and headed to Zou. Besides, while they are hearing about the group on Zou, Bartolomeo shows them their updated bounties and wanted posters, although notably, Sanji is wanted only alive.

Did Luffy win in Dressrosa?

Yes, Luffy and the Straw Hats did win in Dressora, successfully taking down Doflamingo’s market.

How long is Luffy in Dressrosa?

I think that Luffy has been in Dressrosa for around a month since he sleeps for 3 days; they leave the next day, then get to Jaya the same day, and Skypiea the next morning, and defeat Enel the day after that.

Did Luffy beat Bellamy in Dressrosa?

Yes, Luffy and Bellamy have a deathly fight in episode 711, and Bellamy is finally defeated.

Who defeated Sugar in Dressrosa?

Usopp is the one who defeated Sugar in the Dressrosa arc.

In episode 697, Usopp attempted an impossible shot at Sugar from the plateau with the support of Viola’s ability with Doldo, Hack, Tank, Kin’emon, and Kanjuro holding the citizens off.

Who is the true king of Dressrosa?

In the past, the true king of Dressrosa was Riku Doldo III. At that time, the country was peaceful even though it wasn’t wealthy.

Is Dressrosa Arc Worth Watching?

Yes, the Dressrosa arc is one of the five most important and good arcs in One Piece, so it’s worth watching and reading.

In the Dressrosa arc, new characters are introduced, and several new storylines are developed. Besides, this is also the major arc leading up to the next Wano arc.

Is the Dressrosa arc important?

Yes, this is an important arc that links to the final Wano arc. Besides, in this arc, we can confirm that Sabo is alive, which probably reassures Luffy that he still got another brother and another reason to live. Then, at the end of the Dressrosa arc, the Grand Fleet is formed, giving significant support to Luffy and strengthening his position as a powerful pirate.

What episodes to skip in the Dressrosa arc?

I think you should not skip any episode in the Dressrosa arc because every detail can be an important part of the team’s future.

If you cannot bear the slow pace of the anime, you can read the manga to catch up on the story and back to the anime to watch the fighting scenes. The Dressrosa manga chapters are 700-801.

What episode does Dressrosa get saved?

Dressrosa gets saved in episode734.

What is the episode after the Doflamingo arc?

The Doflamingo arc is the Dressrosa arc, which ends in episode 746. So, the episode after that is episode 747.

What is the arc after the Dressrosa arc?

Can you skip the Dressrosa arc?

No, you should not skip the Dressrosa arc because it is a major and important arc in One Piece.