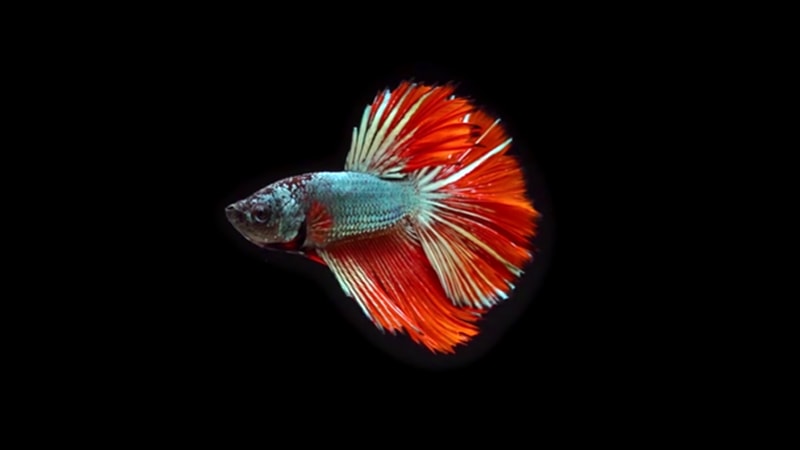 Despite being one of the most widely kept aquarium fish, the average lifespan of Betta fish is very short, only about 2 to 5 years. However, this number can be changed depending on the living conditions.

Fortunately, you can detect warning signs of your betta fish behavior before death. Common symptoms can include slow movement, loss of appetite, fading colors, etc.

As a pet owner, it’s essential to be aware of when your pet may die. In this case, it can also help you prolong your betta’s life. Therefore, do not rush to skip this article; read on to learn what those signs are.

Lethargy is a common and primary sign, which means something is wrong with your betta fish.

Betta fish are known for being very active; they enjoy exploring the tank and playing around during the day. So, if your bettas suddenly become lazier and move more slowly, there is a good chance that they are not in good condition. However, such symptoms are insufficient to diagnose the problem your fish is experiencing accurately.

When there are issues with ammonia, nitrite, nitrate, tank temperature, illness, or old age, betta fish tend to be lazier than usual. It would help if you also kept an eye out for depression, as bettas are vulnerable to it.

Decreasing appetite is the condition that worries betta fish owners the most since their fish are extremely sick when it comes to reduced appetite. However, you should not be too worried; this is a normal symptom of old age. As the Betta grows, its metabolism slows down, so it simply doesn’t need as much food as it used to. Even so, if the temperature is lower than normal, it can be harmful to the betta’s health.

Furthermore, severely ill bettas will have a reduced or non-existent appetite. Older bettas change gradually over weeks or months, but sick bettas change much faster, often in as little as a week. As a result, you must exercise extreme caution.

Compared to lethargy, fading color is a more worrisome state. Generally, betta fish only fade when they are seriously ill. However, do not rule out the possibility that your bettas are too old, stressed, or getting sick. It is also possible that they may also be marbled genes, which can change color at any time during their lifetime. Depending on the case, the gene makes the color lighter or darker.

A betta fish should swim in the tank’s middle, bottom, or top layer. Something may be wrong if your little fish keeps lying flat on the substrate. If Betta fish lie flat on the ground, they are sick, which is a very bad sign.

There can be many reasons why the Betta is at the bottom. It could be due to illness or old age; if so, chances are your Betta won’t live much longer. But if the cause is from the quality of the water source or the temperature of the water in the tank, it can still be salvaged.

To improve the water quality, perform three water changes within 24 hours and keep ammonia and nitrite at zero and nitrate below 10 for the following weeks. To fix the water temperature in the tank, it should be held at 75-80 degrees Fahrenheit.

Frequent breathing is a major symptom similar to a coma because something is wrong, but it is unspecific. While this symptom is not a death sentence, it is also an early warning sign that you will notice when your Betta is sick.

Bettas breathe rapidly and laboriously when they are sick or senile due to low oxygen levels, stressful conditions such as pre-existing medical conditions, high ammonia levels, or chemical corruption. However, as we mentioned before, older betta change over weeks or months, but sick bettas change much faster, often in as little as a week.

Moreover, sometimes, you may observe that your fish are breathing in the air more often than usual; there is likely a water quality problem. Usually, a little ammonia or nitrite will suffocate or burn your fish, forcing them to use their labyrinth organs more than usual.

Besides, the aquarium may also have very little dissolved oxygen. If so, try to increase the amount of oxygen by adding live plants, a bubbler, or a waterfall filter.

Dropsy is a symptom of kidney failure, not of old age. In reality, this is a disease that is nearly always life-threatening.

Dropsy has five main causes, but only one is truly treatable but extremely difficult to treat. This condition will kill less than 90% of the fish.

This disease is distinguished by excessive swelling in the fish, as well as pinecone-shaped scales. It is linked to kidney failure, a poor diet, a lack of osmotic regulation, and other organ infections. When the kidneys fail, fluid accumulates in the fish’s body, causing it to swell. Older Betta fish are more likely to develop kidney failure and other viral, bacterial, and fungal infections, which puts them at risk for ascites.

TB in fish is caused by a bacterium called Mycobacterium. Unlike the symptoms of tuberculosis in humans, fish infected with TB begin to become less active, and the color fades. They may also exhibit ascites. Sometimes, they can lose their buoyancy, damage the skin, and appear pitted.

This disease is extremely dangerous because you will not be able to detect any symptoms if your fish has it. Your fish could have been infected with tuberculosis for up to 6 months before showing signs. Additionally, you may catch it from your fish. Instead of causing serious lung problems, it will manifest as a rash, which can be treated with antibiotics but has serious side effects. As a result, always wear gloves when handling germ-infested tanks.

Do betta fish pretend to die?

Fake death is a very normal behavior in betta fish. There are many reasons to explain why your betta plays are dead. But the most typical can be mentioned as the ability to want to attract attention or to scare their owners.

It sounds scary, but there’s nothing to worry about here; they’re just getting comfortable!

Do Betta fish float or sink when they die?

The decay and ability of the body are related to the fact that a betta fish dies and floats on the water. Even if you are perplexed by this subject, you can read this article from beginning to end. This guide explains whether betta fish float when they die and the swim bladder disorder.

Is It Normal For Betta Fish To Lay On The Bottom Of The Tank?

Sometimes, it’s normal. But, bettas living in too small aquariums and/or being kept in poor water conditions may be listless and laying at the bottom all the time without any other signs of stress.

How can you help a dying betta fish?

The only thing left to do is to comfort your Betta fish if he or she is dying. Take a glass bowl, fill it with water from his or her tank, add a few drops of pure Clove Oil, and put him or her to sleep when you see that it is time.

Video: How to Save Your Sick Betta Fish