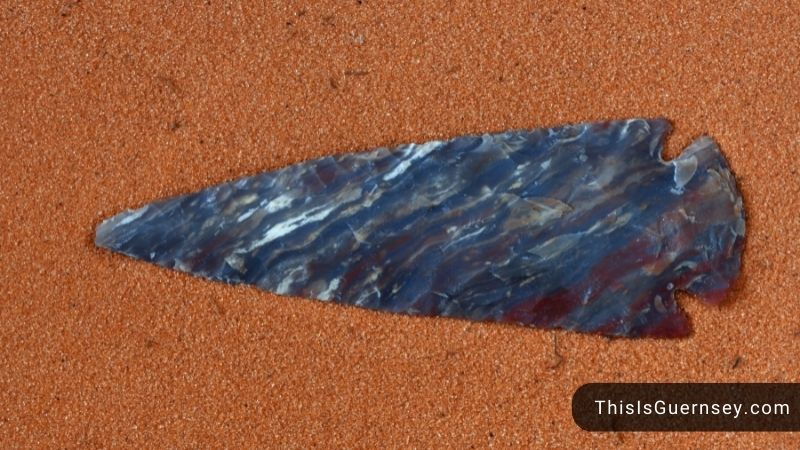 The arrowhead is a type of stone tool used by Native Americans. They were used for hunting, fishing, and warfare. Because of their high quality and beauty, arrowheads became valuable pieces of art. Today, they are very popular with collectors and are often sold at auctions for large sums of money.

In short, we can identify these arrowheads by the shape and size of the arrowhead and by other factors.

In this article, we will discuss how to tell the age of an arrowhead. If you are curious about this topic, let’s start with our article.

How To Tell The Age Of An Arrowhead Or Point

To tell the age of an arrowhead, we can look at its design, material, size and shape, as well as signs of use or wear.

Other times, archeological methods such as radiocarbon dating are necessary to date arrowheads. Particularly, archaeologists determine the age of obsidian points based on the thickness of the hydration rind. They compare the rind’s measurements to established dating techniques. This will provide a rough age estimate based on the thickness of the rind. By slicing the rind with an obsidian tool, you can determine its thickness.

It is possible to date an arrowhead by examining its design or style. Many arrowhead styles were distinctive to specific time periods. This information can help us determine when this type of arrowhead was used. Many distinct styles were utilized in specific regions, which will assist us in identifying the specific cultural contexts.

For example, in the Early Paleoindian cultural period, which was from 14,000 to 10,500 B.P. (Before Present), the widely-used arrowheads or points were fluted points, which are fluted on one or both sides.

Additionally, in the period of Fort Ancient (1,000–500 B.P.), people used bows and arrows to hunt animals, so the arrowhead was used as the arrow tip, which has a triangle shape.

To date an arrowhead or point, it is possible to rely upon the kind of stone or material it is made from. If the point is constructed of flint, exposure to environmental conditions, such as sunlight, rain, air, and freezing, will cause it to become coarser over time. The colors would also lighten, eventually reaching white. The arrowheads made from flints appeared in ancient cultural periods. For example, the points made from flint types can be dated mostly from Paleoindian (14,000 – 9,000 B.P.) and Archaic (9,000 – 4,500 B.P.) cultures.

Signs of use and wear on an arrowhead can also be used to determine its age. Specifically, wear indicators include small dings or damage to blades or tips, as well as the smoothing of previously sharp edges. Most prehistoric tool users sharpened their blades or replaced dull tips on their tools, which made changes in the blade’s symmetry. The symmetrical blade could be slightly changed to one with an off-balanced form or even a distinctly diagonal bias.

In addition to the listed factors, it is possible to identify the historical periods of the arrowheads using their sizes and shapes. For example, Basal-Notch-shaped projectile points of medium to large size were often used in the Middle to Late Archaic cultural period, while the early Archaic used the smaller ones.

How old are fluted arrowheads?

Fluting is a distinctive technological tradition that was developed by early human cultures that expanded throughout the Americas. Fluted point technology is well known in North America, as indicated by discoveries dating from 13,000 to 10,000 years ago.

How old are Dalton arrowheads?

The Dalton Tradition is a projectile point tradition from the Late Paleo-Indian and Early Archaic periods. Around 10,000-7,500 BC, these points first developed throughout most of Southeast North America.

How old is a Clovis point?

Ancestral Indigenous peoples made characteristic fluted projectile points known as “Clovis points” across most of North America 12,000 to 13,000 years ago. Clovis points are easily identified by their great size, superior craftsmanship, and the exquisite stones toolmakers picked for them.

How Do You Know If An Arrowhead Is Valuable?

After years of applying dating techniques to the bone, charcoal, and a variety of other materials, researchers have developed a detailed chronology of the prehistoric cultures that formerly inhabited the United States. Late Prehistoric – 1 A.D. to the 1800s, Archaic – 6,000 B.C. to 1 A.D., and Paleo-Indian – 10,000 to 6,000 B.C. are three broad classifications and their corresponding dates. The further back in time a stone tool was manufactured, the rarer it is and the greater its worth on the current antiquities market. The names Clovis, Folsom, Goshen/Plainview, Hell Gap, Eden/Firstview, and others have been given to cultures in the earliest of the three divisions.

How much is an old arrowhead?

Because they are so common, you won’t be able to get much for a typical arrowhead. Nevertheless, some arrowheads are significantly more valuable than others. In the best cases, an arrowhead can be worth $20,000, although it may only be worth $5, and an average arrowhead is only worth about $20.

Additionally, the age of arrowheads can make a significant difference in their prices. The older the arrowhead, the higher the price. The well-made, authentic Clovis or Folsom era arrowheads, for instance, can easily fetch $5,000 to $10,000 each, while equally fine Late Prehistoric arrowheads can fetch only $100.

How do you authenticate an arrowhead?

An expert-issued certificate of authenticity is the most reliable method for determining the age of an artifact because it guarantees that the item is as old as the seller claims. In addition to its age, the certificate identifies the culture represented by the artifact and includes references to established terms such as Clovis, Folsom, Hell Gap, etc.

How can you identify an Indian artifact?

Here are some tips that you can use to identify an Indian artifact:
– Look for a clear point as well as a defined edge and base in arrowheads and spearheads.
– Identify the types of stones used in the construction of Native American stone artifacts.
– Look for irregularities in bone and shell tools when compared to the original shape of the material.

How do you identify a Clovis arrowhead?

What is the rarest arrowhead?

The Clovis arrowhead is by far the rarest arrowhead in the world, with only about 10,000 ever discovered. These expensive, rare arrowheads can fetch hundreds or even thousands of dollars.

Video: How To Identify Fake Arrowheads