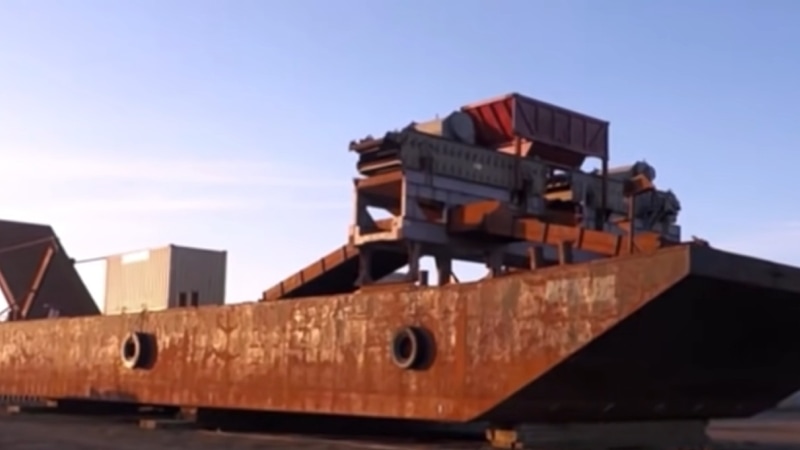 Bering Sea Gold is a reality television series about gold mining by a group of enthusiasts. Besides gold, they also look for other precious items hidden deep beneath the seabed.

If you watch the show, you will definitely know Shawn Pomrenke’s Mega Dredge. It was a big project that Shawn Pomrenke mentioned on the show. “Mr. Gold” made an epic decision to turn the mega barge into a gold-digging machine. He said it would be the biggest gold dredge in the Bering Sea.

And the most-asked question is “what happened to the Mega Dredge?” To answer your question, I’ve collected information both from the Internet and Shawn’s interview answers. As a short answer, the project has been put on hold for now.

The Backstory Of Shawn’s Mega Dredge

Shawn Pomrenke, Shawn’s dad, did not show much confidence in his project when he took him to see the rusting flat-topped barge called Tuvli 160, which Shawn was planning to turn into a mega dredge. However, Mr. Gold insists on turning that mega barge into a gold-digging beast with the ambition of making it the largest gold dredge on the Bering Sea.

While Shawn was operating the Christine Rose and preparing for the mega dredge, his father asked him to invest in the inland mine of his family. He gambled on mining at Bluff in hopes of finding enough gold to cover all the costs of the new inland mining projects and his Mega Dredge. However, he wasn’t able to find nearly enough gold. Again, plans for the big barge were put on hold.

After a bad season the previous year, Mr. Gold returned the next summer, got dad’s inland dream running, and made progress on his dream dredge renovations. However, that’s where it ended.

As Shawn had already invested millions of dollars into buying and building the dredge before starting the project in the first place, the project went by the wayside after the initial construction phase.

A group of investors come together and put up $2 million. As Shawn has limited time to be trained to be a finance manager, he brings in a guy to do the job. However, he is swindled by the guy, and his money is stolen. Christine Rose and Mega-Dredge are seized by Shawn’s investment company after it goes bankrupt.  In Season 8, Shawn repurchases them out of bankruptcy.

Mr. Gold’s next move puzzled many fans because they thought Shawn would continue renovating Mega Dredges. He spent more than $800,000 on rebuilding the Myrtle Irene but barely mentioned the Mega Dredge during that season. The mega dredge hasn’t been built yet.

Seeing that, I believe it left many of us wondering what this meant for the future of the largest dredge in the Bering Sea? what happened to the Mega Dredge?

What Happened To The Mega Dredge?

The barge isn’t in the water, and the project is on hold due to factors such as ABS regulations on load line and hull thickness.

According to the requirement, the steel hull of a boat should be within 25% of its original thickness. However, some parts of the Tuvli 160’s hull were not thick enough. Shipbuilders were asking $2 million to fix the old barge. It is too much. Even the profit that Shawn earns from large offshore dredging may be unable to make up for it. According to Mr. Gold, the project would be too expensive to complete due to the cost of reinforcing the hull.

The Mega Dredge in this form will not be happening, but that does not mean that the idea is dead.

Is the Mega Dredge over?

When being asked, “So the Mega Dredge is done?”, Shawn said, “not done, just Plan B.”

Shawn will build a new one from scratch. It could be renovated into another type of dredge or a suction one.

Who owns the Myrtle Irene on Bering Sea Gold?

Did Shawn buy the Myrtle Irene?

Shawn became a partner with Arctic Gold Mining after purchasing some lease claims in Tomcod. He has paid $800,000 for shares.

Did the Myrtle Irene sink?

In 2018, the Myrtle Irene sank. Ken and team members attempted to pull the mining vessel out of the water, but it was damaged.

Over 75,000 gallons of water entered through an open hatch during the attempts of backhoes to move the vessel safely onto land.

The sinking indeed caused many problems for Ken and his crew, but in the end, it was what the captain needed to upgrade the barge to a much higher standard.

Is the Mega Dredge built yet?

A confirmation by Shawn Pomrenke in July 2022 states that he can not hold on to the plans to renovate the Tulvi 160, which he calls the Mega Dredge, because of its associated costs. So, the mega dredge is not built yet.

What has happened to Steve Pomrenke?

Steve left ‘Bering Sea Gold’ several years ago. He worked there for about six years. In his IMDb profile, his last aired episode was in 2018. Steve has no social media accounts, so it’s unclear what he’s been up to over the last few years.

As a whole, when it comes to ‘Bering Sea Gold,’ it would appear that the film is based on a variety of real-life events that are sometimes edited during post-production to give an enhanced feeling to the drama.