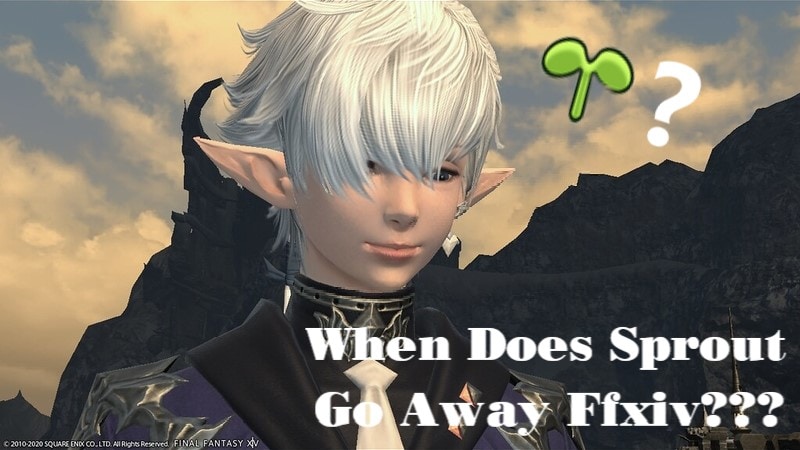 If you are a newbie to Final Fantasy, you may wonder when does sprout go away Ffxiv. This post will tell you when the sprout icon appears in the game, what it means, and how to get rid of it.

To give you a quick answer, the sprout is a small symbol next to your name and any other beginner Final Fantasy account. This icon won’t disappear until you have reached 168 hours of total playtime AND finished the final quest of Stormblood. If you have moved from Stormblood to Shadowbringers and the sprout still persists, there is a glitch, and you will have to do some tricks to get rid of it.

Everything you need to know about the sprout status is here. Learn what it is, how to get rid of it, what it means when accompanied by a crown, and so much more.

What does the sprout mean FFXIV?

What is it for?

Final Fantasy XIV has a new feature called sprout, formally known as “New Adventurer,” that allows you to see who is a “newbie” in the game.

The sprout icon will appear next to your name above your character’s head if you haven’t reached the Stormblood expansion yet. It will stay there until you finish the expansion and surpass the milestone of playing the game for over 168 hours.

Having a sprout icon is good or bad?

This feature has sparked some controversies in the Final Fantasy community due to the discontent of some gamers towards the sensation of being labeled as a noob. However, many newbies show appreciation for this icon, and some even wish not to lose it after reaching Shadowbringers.

Why? The sprout is the simplest form of explanation if there is any failed attempt in a team quest. Thanks to the icon, newbies don’t have to explain themselves too much, and other players don’t go hard on them frequently either. Players with the sprout icon also get helped out a lot by veteran Final Fantasy players.

This is the Returner icon. Players who haven’t entered the game for more than 45 days and are in possession of at least one job or class at or above level 50 will be granted the Returner status. They will have access to the Novice Network, where new players and mentors can chat and exchange advice to survive duties and quests.

It’s possible to toggle off the returner icon with a command: /returnerstatusoff. If you want to free yourselves from the icon forever, try to run a 72-hours gaming session. You don’t have to do it constantly since it’s impossible having the game on all the time. The system will count the total hours and automatically remove the icon after completing the welcome-back gaming party.

Due to many benefits of owning the sprout icon, including access to the Novice Network, numerous players prefer keeping the New Adventurer status. The conditions to maintain the sprout icon are:

There is a catch here, players who fail to surpass 1 of the conditions above won’t be able to remove the sprout permanently either. You can have over 600 hours of playing under your sleeve. But, if you haven’t run the entire Stormblood expansion, your status still remains New Adventurer.

How to remove sprout FFXIV

There are 2 standard ways to remove the sprout icon:

When Does Sprout Go Away FFXIV?

Sprout automatically goes away after you complete the last quest of Stormblood and enter Shadowbringers. By this point, if you have played the game for over 168 hours, there shouldn’t be any problem.

However, some players have reported that the sprout icon doesn’t disappear even after meeting all the requirements. This is a minor glitch in the system of Final Fantasy. To trigger the removal of the icon, you can try logging out of the game and logging in again. This trick works for most players.

FFXIV How To Get Sprout Back

Unfortunately, there is no way to get the sprout back after losing it, and many fans are hoping that Square Enix will permit players to toggle the little icon on or off freely.

There are many benefits to owning the sprout icon. The biggest of them must be the chance to receive more commendations after playing roulette. Newbie players usually get more commendations from other players as a form of encouragement. If you are playing healer or tank, the chance is even higher.

It seems that we will have to wait for the new expansions and update to see if Square Enix will go with the flow or not. But, it’s very likely that they won’t change the current mechanism of the New Adventurer status soon since it will defeat the purpose of the mark for newbies only. If pro players can toggle the icon on all the time to draw in more gifts, then there is no reason why the icon should still exist.

To remove definitely the returning player status, players have to complete 72 hours of gameplay without having too long prolonged pauses. Typing /returnerstatusoff also will toggle off the status, but this is only temporary. Players must use this command to remove the returning player icon every time they enter the game.

How do I remove new adventurer FFXIV?

You can toggle off the icon by typing the command /nastatus off into the chat bar. After recent updates, players can remove the new adventurer icon definitely before even completing the requirements of playing over 168 hours and completing Stormblood.

What does the green leaf mean on FF14?

The green leaf is commonly called sprout or new adventurer icon in Final Fantasy 14. This leaf appears only in new players’ accounts.

Can I keep the sprout FFXIV?

No, the game system will remove the sprout after players have completed 168 hours of gameplay and finished the last quest of Stormblood Expansion: A Requiem for Heroes.