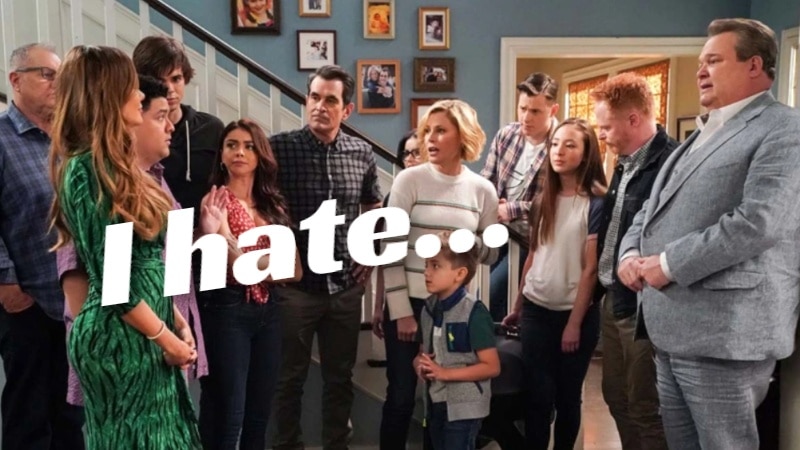 For us and many fans of the show, these are the 5 worst characters of Modern Family:

Let’s dive into the details of why these 5 characters are the most hated Modern Family!

Claire is a tough woman who is quite a perfectionist. She is also judgmental toward Gloria, thinking that she married her father for money, even though Gloria has proved to be a passionate, loving, and real person many times. She even calls her a gold digger behind her back and in front of her own children. They had a big revelation scene about the gold digger comment at a family party in an earlier season.

Why Cam is the worst character in Modern Family

Cam is overly dramatic and acts like he is the center of the world. He responds negatively whenever someone points out something about him that they don’t like, while he is quick to judge others. Nevertheless, Cam is still hilarious and loving and deserves love just like any other character in Moder Family.

Even though he is a caring father and a great husband, Phil Dunphy still has flaws like any other character on the show. His obsession with Gloria sometimes comes off as creepy, and he is very flirtatious with other women as well. Even though he remains loyal to his wife, many agree that it’s not the best feeling knowing that your husband thirsts over another woman openly.

Many fans have commented how they dislike Haley. She began her journey as a rebellious teen who was a bit of a slacker and would hang out with many bad boys. She parties a lot and usually makes horrible decisions for herself. However, along the run of the show, she boasts of amazing character development. Thus, she never ranks first in the list of worst characters in Modern Family.

It’s surprising for many fans that people hate Gloria, but they do have many reasonable reasons. Even though Gloria comes off as a fun person and loving mother, how she cares too much for Manny to the point of threatening one of his girlfriends with a gun really shocked fans. Many also think Gloria is too obnoxious and has double standards, which is relatively unlikable.

Most Annoying Character In Modern Family

Characters are hated for many reasons, but what if we sort them according to being “annoying” only? These are our top picks of the most annoying characters in the show and why fans find some of their actions unpleasant.

Manny is the most annoying character

Many people agree that Manny has too much screen time and is an annoying character. He is too much of a philosopher and has shown creepy affection toward girls on the show. He also whines a lot about how people should love him more, while he doesn’t bring much to the table.

Why is Alex Dunphy so annoying?

Alex is a smart lady who sometimes comes across as obnoxious due to her high intelligence. She sometimes makes jokes that people don’t really understand, thus leading to her characters appearing to be annoying to the audience. We still love our young Alex, she is just a bit hard to follow.

The problem with Joe is the writing. Joe is a young boy who can instantly deliver a witty comeback to adults that an average child can never deliver. This makes his character appear annoying and unrealistic.

Why is Lily from Modern Family so annoying?

With her wit and savvy, Lily proved to be among the most intelligent characters on the show. She was very well received during the first seasons of Modern Family for her deadpan jokes and brutal honesty.

However, many fans of the show think that she is a bit annoying because she seems too quick-witted for her age and lacks realism. A child her age shouldn’t be able to deliver that many punchlines, making her character appear more scripted.

The actress who played Lily, as she reached her teenage years, many fans of the show started criticizing her for bad acting, while many others defended the actress because her character, Lily, is very deadpan in her daily life.

Who is the most loved character in Modern Family?

Despite her flaws, Gloria is the heart of the show, and without her, Modern Family will lose a tremendous touch of passion. Fans love a tough, fun, and good-natured character.

Does everyone hate Manny Modern Family?

So many fans dislike the characters as he gets older. Being too much of a philosopher can be very annoying. And he is arrogant, thinking that people should all revolve around him.

Why is Phil Dunphy so likable?

Phil is by far the most likable character in the show. He is a sly and funny character, makes the most hilarious dad jokes, is a fan of magic, and is chill all the time. He cares a lot about his family and will go miles to assure them he is always in the picture.

Who is the main character in Modern Family?